The Chef Show is part play – part cookery demonstration (including tasters!). It takes the audience behind the scenes on a busy Saturday night in a local curry house. It reflects on the many villages and market towns where there are ‘Indian’ restaurants with staff that rarely have any social contact with other members of the community apart from serving them food. 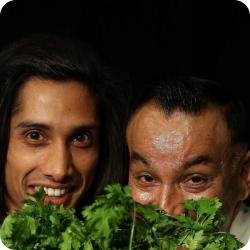 Two actors play a cast of thousands in heroic and comic tales inspired by interviews with real people in the trade. They are also joined by a chef a local restaurant – who will be offering a spicy cookery demonstration. All this is followed by a chance to taste the food and share conversation with the chef and the cast.

The Chef Show was written by Nick Ahad, who has written for Emmerdale and now has his own show on BBC Radio Leeds. Nick grew up in an Anglo-Bangladeshi family that ran a restaurant. Nick commented that “The Chef Show tears down that barrier. When you see the man making your tikka masala has a life, a family, dreams of his own, then you see his humanity. When he’s on stage and you’re hearing his story, you can’t fail but see someone more than just the bloke who makes your food. That’s why I think The Chef Show is vital and timely.”

The Yorkshire Post said “A stroke of genius. While it makes serious and urgent points that speak to the divisive times in which we are currently living, the play is also very funny. Humour, food and empathy – a potent and winning combination.”

The play is directed by Stefan Escreet of Ragged Edge Productions. Stefan has been working in Theatre for over 30 years, having started at The Dukes Lancaster as a professional actor before becoming a director and radio drama producer. He has recently established Ragged Edge after being Associate Director at Theatre by the Lake in Keswick for many years.

The play toured nationally in 2018 and won a Rural Touring Award. This year it will be touring in May and June in 2019. Starring actors Kamal Kaan and Rohit Gokani with guest chef Abu Sufian.

Tickets are £12 (£6) under 18s and include the tasters of the food at the interval and at the end! They can be bought at the village PO, Threlkeld Village Hall Coffee Shop and on-line at www.threlkeldvillagehall.org/whats-on.